It’s about an apple tree. But, like all memories, it’s about much more than that.

Listen to the podcast here or click the graphic above.

Ideally, we would all have time to work regularly on our writing projects, never allowing the fire to cool or the story to get stale. But reality is rarely ideal. It’s reality. It’s busy times at work, kids who need love, meals that need making. Those clothes won’t wash themselves, you know. So we often find ourselves torn away from our works-in-progress for a time and they turn into works-in-the-backs-of-our-minds. Sometimes we wander away from our writing fairly purposefully when we aren’t sure what comes next.

Either way, how do you get back in the groove after an absence? Here are three easy ways…

Reread. If it’s been just a few days, reread the last chapter. If it’s been more than a week or so, read what you have written so far, from the first to the last page, to get yourself not only back into the story, but also to reorient yourself to the flow of the story thus far. It’s more than simply figuring out where to go next. It’s recapturing the flow, the voice, the tension, the characters, the setting. Immerse yourself in it as a first-time reader would and you’ll be propelled forward in the story by the momentum you’ve hopefully built up. Plus you’ll see if what you’ve written thus far still holds up after letting it rest. You can also listen to what you’ve written, which gives the story another dimension altogether.

Outline. After that, see if you can outline what happens in the next few chapters. It helps to have at least a small idea of the road ahead. Just seeing a paragraph of synopsis (which I tend to write before an actual chapter is written) can almost trick you into thinking you’ve already written that chapter and give you a small feeling of accomplishment, which you can then ride into the actual writing of that chapter. Then, when it’s written, you can go back and tweak your synopsis to match what you actually wrote. In this way you are also finishing a chapter-by-chapter synopsis to put into your book proposal later. Two birds, one stone.

Research. Read over any research notes you may have taken to put you back into that world and spark your imagination with possibilities for your characters. If you are writing anything besides contemporary fiction that is set in a city like your own, you need to put yourself back in the right place, the right time period, and the right clothes. You need to pick up those speech patterns you’ve given your characters. You need to reorient yourself to that world, reintroduce yourself to its problems.

Now stop fooling around on the internet and get back to work!

This is a picture of my son.

It is a self portrait made back in March when he was still four years old, sent home in his personal file when he left his daycare/preschool and started kindergarten. Being four, this is as skilled as his self-portrait could be, even though I know he really sees himself more like this:

Do you ever feel like your talent may not live up to your own expectations?

Does that fear keep you from trying something great?

In almost any creative endeavor, we have an idea of what we want the end result of our efforts to be. The knowledge that our labors–our writing or painting or sculpting or songwriting or drawing in crayon–may never quite live up to the perfect standards we have in our heads can keep us from trying. One can feel paralyzed by potential.

My son may not be a real ninja turtle, but he is taking karate lessons. 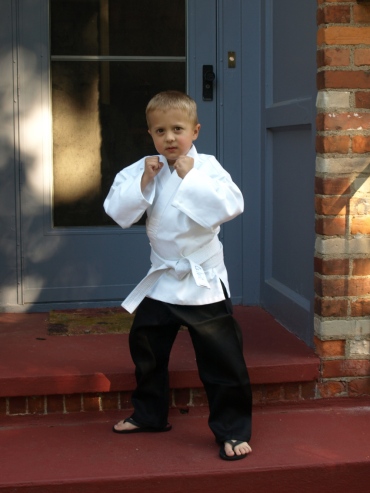 You’ve got to start somewhere.

It was bound to happen. Fate or Providence had written it into the very fabric of the universe from eons past. We knew in November 2011 that it was inevitable. The only question was when. And 8:09am on Tuesday, March 26th, 2013, was the answer.

I locked my only car key in the running car.

Yes, folks, these things will happen. When we don’t prepare and make provision for our own idiocy, it will catch up with us in the end.

Here’s what makes this extra frustrating.

1. I had been planning for over a year and a half to get a copy of the key made (but put it off because it’s one of those special keys that only a dealership can duplicate and I didn’t want to spend the time/money stuck at a Ford dealership when I could be working, doing fun things with my family, etc.)

2. I have a remote to unlock the car which recently broke off my key chain and had even more recently just been in my coat pocket where I could have easily accessed it to unlock the running car Tuesday morning. Just the day before I had unceremoniously dumped it into my purse which, you guessed it, was sitting idle in the passenger seat in the running car.

3. There is a keyless entry pad on the driver’s door but since we got this vehicle used from a non-Ford lot, we don’t know what the code was. I was told I could get it changed at a dealership (see point number one for why I didn’t).

Yes, my laziness caught up to me on a cold, snow-sprinkled morning in late March and so I sat in my office awaiting the locksmith, typing out this post. And here’s the kicker. When I called the Ford dealership and set up a service appointment to get a second key made, get a new keyless entry code, and a new remote they told me it would take “about an hour.”

An hour. Just an hour of my time, tens of thousands of which I have undoubtedly squandered in my lifetime thus far. And in reality, it took a half hour. (Oh, and $150.)

Sometimes the tasks that seem odious to us are really not that big of a deal. Perhaps it’s time to stop putting them off until some unknown future time. Because they will catch up with you. They will lock you out and then smirk as you rush around trying all the doors, looking for a way in, cursing yourself for waiting.

What have you left undone? Think maybe it’s time to just get it over with?