When we moved into our little brick house in late 2005, we repainted every room and ceiling, brought in our furniture, and generally left well enough alone apart from adding or replacing furniture. Sure, we did some home improvement projects–the ceiling in the basement family room, the main floor bathroom, the roof, and the landscaping being the ones that come to mind. But other than that, for the most part, nothing’s changed really significantly in the last ten years.

Then somehow, we ended up changing five rooms rather dramatically in the course of about a year and a half. Some of those changes have been highlighted in earlier posts on this blog, but I’ve been wanting to get them all up in one, with before and after side by side.

I’ve a feeling a great many people (especially women perhaps) might be of the opinion that these pictures surely must be backwards. But no, and in fact transforming the very feminine sun room into the very masculine cigar room was my idea, not my husband’s. The result is that we both spend a lot of time in this room now where before he almost never did. Those wicker chairs were not terribly comfortable. And now he has a place to smoke cigars all year long without being exiled to the freezing or mosquito-y outdoors. We spend a good deal of time writing out here, as well as entertaining friends while children roam the rest of the house unsupervised. It’s great. We finished more of the work by the summer of 2016. To see more of this room, click here. 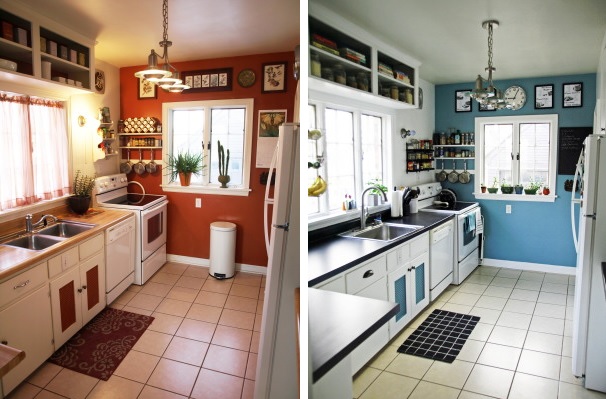 So. Much. Painting. This project was six weeks of pretty concentrated work, most of it painting all those cupboards and all that woodwork a bright, washable white (they were just painted with primer before that and got so filthy). This project took up much of October and November 2017. To see more of this room, click here.

This was part of our big room switcheroo starting in January 2018. With our master bedroom on the first floor, there’s more privacy for everyone and our wandering about well after our son has gone to bed doesn’t disturb his sleep as it once did. I like waking up in a room with an east facing window, even if the blinds are drawn because little fingers of sunlight get through the bamboo blinds and nudge me awake. Well, they do when there are no clouds, which hasn’t been often of late.

Somehow, we got almost all of my son’s possessions into one room rather than having them scattered throughout the house. He has far more room and storage space than he ever did before and the door can just be closed on the mess. It’s a beautiful thing. 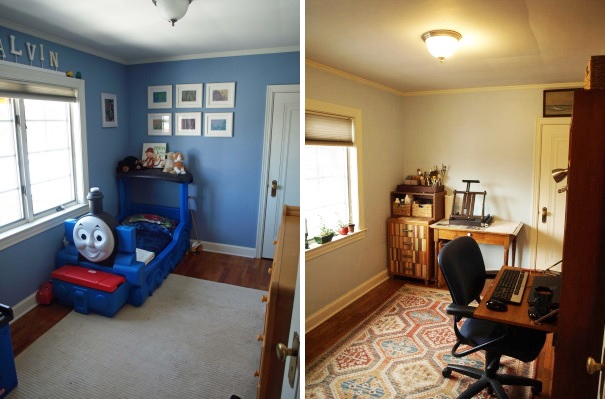 And of course, the reason behind the room switcheroo was to give me an office that was 100% mine, with no one else’s desks or stuff in it. I’ve worked from home for thirteen years, so it was about time. It has really helped my mood and my peace of mind. More pictures of this room can be found here.

All of these improvements have made our house function better and have made it more livable. We have fallen in love with it all over again and have stopped considering a move to someplace bigger. Sometimes you already have what you need–you just haven’t figured out the best way to use it. Now I think we have. And as we were moving all that furniture around in the ice and snow and rain we decided that to move an entire house just seems like too much work anyway.

Now we’re entering the season when most people are thinking of spring cleaning and big home improvement projects and we find that our big projects are mostly done. So what will we do with ourselves if spring ever comes? I suppose we’ll just have to sleep soundly, work without interruption, eat a great dinner, and sit back and enjoy a cigar. 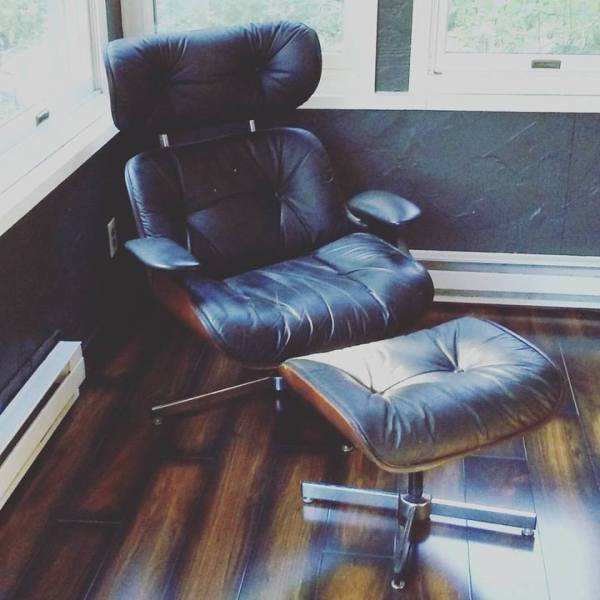 The cigar room continues to slowly come together with this Eames-style mid-century chair for which I got up at 6:00 AM on a Saturday. I got my name third on the sheet and should have been third in line when the sale opened, but the first two ladies were slow and apparently not too eager, so I was the first one in the door at 9:00 AM. One of the estate sale workers had already told me exactly where in the house to go for it. I snagged the tag a split second before the lady whose name was after mine on the list (and then avoided making eye contact with her).

The lady who checked me out told me they’d gotten a lot of calls about the chair, so I bet there were a number of disappointed people out there this morning. But I’m not going to worry too much about them. Instead, I’m going to sit smugly in my awesome new chair and get back to drafting my next novel. In fact, I used the time waiting in the car this morning between 7:00 AM and 8:30 AM to get more than 700 words written, so I’d say it’s been a pretty productive morning.

Now, I say Eames-style because it is not an authentic Herman Miller Eames chair. Here’s a great article on how to tell the difference. But the estate handlers advertised it and priced it accordingly. I never would have bothered going if it were authentic.