My last guest post at the Breathe Christian Writers Conference blog today. Now that National Novel Writing Month is over, what are your next steps?

Finally! It’s over. After thirty days of breakneck writing, it feels good to take a moment to breathe. But once you’ve done that, there are a few more things you should consider doing as this year wanes and a new one dawns on the horizon…

Unless you’re writing middle grade fiction, you’re going to find that most novels are not 50,000 words. YA is generally around 70,000. Contemporary fiction is about 80,000–100,000. Historical fiction and sci-fi/fantasy can get up near 120,000. That’s not to say you can’t write just what you darn well please, but if you want to someday publish your novel, you need to take into account reader expectations and publisher needs. So if you found yourself at 50,000 and felt like things were just getting really good, keep drafting! If you had concluded your story around 50,000, go back to the beginning and rewrite and revise, adding details, subplots, dialogue, and whatever else you need to make your story full and rich.

My advice? Don’t put your 50,000 words away and decide to finish the draft when the holidays are over or in the summer when you finally have some time. Push ahead and finish it now, before the fire is quenched by time and you begin to doubt yourself. Pound out the rest of that draft on the same writing schedule you’ve been keeping in November. Just get it down. It will be a great Christmas present to yourself to have it finished.

Then go write some more!

Okay, NaNos, we’re just about halfway through the month. If you’ve been keeping up with the average daily word count goals, that means you’re hovering around 25,000 words right now. Good for you! If you’ve been falling behind, don’t fret—all is not lost! It ain’t over ‘til December! 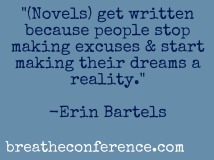 challenges—keeping up steam, moving your narrative forward, finishing strong. It’s as easy to get stuck at 40,000 as it is at 4,000. So how are you going to win National Novel Writing Month?

Here are a few ideas to keep you going:

Reclaim your time and double down on your efforts. Life just took over. I just don’t have the time. I thought I could fit it into my schedule, but it was just too much. NO! None of us have the time. We must all make the time. Get up earlier. Stop watching so much football. Throw your phone in a lake. Novels don’t get written because there are people out there with nothing to do. They get written because people stop making excuses and start making their dreams a reality. You can do this!

Don’t resolve anything at the end of your chapters. You propel your narrative forward the same way you propel readers forward—with tension…

Then go write some more!

Are you ready? Are you stoked? Have you been brainstorming? Outlining? Researching? Dreaming? Because it is that time of year again, friends—National Novel Writing Month.

out the words—and not quit when the words that yesterday were gushing forth like water from a fire hose today suddenly slow to a trickle—NaNoWriMo is about prioritizing your writing every day for just one month. The experience can be exhilarating and exhausting, frustrating and freeing, all at the same time. And if you’re thinking about participating in NaNoWriMo this year, I want to offer you a few tips and tricks to make it a success…

I realize that not everyone loves bats. In fact, the photo below may make some of you shudder involuntarily. Forget all the arguments for their usefulness and their harmlessness, they just give you the creeps. But bear with me a moment, because I think there is a lesson to be learned from this particular little bat.

I found this little brown bat on the ground when I was putting out some yard bags this past weekend. He was lying on his belly in a dirty bare patch on the still-dormant lawn beneath the lone ash tree on our street (perhaps in the entire city of Lansing) that has thus far miraculously survived the onslaught of the insidious emerald ash borer and getting run into by a car.

I could see this little bat was breathing and, knowing a little something about bats, I knew first of all that it could not fly from a ground position (bats must drop from a height to fly) and that I should by no means touch it, even begloved in thick leather, because if it bit me (which, being frightened and/or hurt, it surely would) I would have to get an expensive and painful series of shots to ward off rabies. So I went to the garage to get a long-handled flat shovel, not to bash the poor thing to death, but to pick it up safely.

I carefully scooped it up, eliciting a threatening display of tiny white teeth but little more in the way of resistance. Then I walked it to the large mostly-dead sugar maple by the garage, well away from the road and any possible contact with unsuspecting children or adults with no sense. I placed the blade of the shovel against the tree and let it slowly grip the bark and huddle against the rough bark. It crawled around a little to find a place sheltered from the wind and remained. A day later it was still there.

I wanted so desperately for it to fly away. I wanted it to leave the shelter of the tree and fly off back to the group of bats it must have wintered with. I suspected that that might be at the top of the very tree I put it on since it has hollow parts. But it hunkered down and did not move. Perhaps it was injured and could no longer fly. Whatever the reason, despite my efforts, it remained frozen in place.

Here’s why I bring this up here on a blog that is mostly about writing. Sometimes as a writer you get knocked down, whether you are a bestselling megastar or someone who has shared your work with only a few close friends or a bunch of strangers on the interwebs. You get a bad review (or maybe lots of them). You get a rejection letter (or maybe lots of them). You get silence (which is sometimes worse than negativity). You’re face down in the dirt wondering what hit you.

I hope that each of you have someone in your life who cares, who scoops you up, talks tenderly to you, and helps you get back on your feet. That person may not have the power to make you fly again, but maybe just knowing that there are those out there who care about you and your work will give you some sense of camaraderie, some feeling that you matter. Because you do. Whether or not you ever sell that screenplay or ever capture an agent or ever make a dime from your writing, you matter.

Then, once you’re back in the shelter of that tree, that place of safety, I hope you will take off and try again. Don’t hunker down and give up. Because your best days are waiting for you up ahead. Create your art. Share your stories. Take flight.