How many of you out there have heard this song from Switchfoot’s first album in 1997?

It was a favorite GenX anti-anthem of mine in college. I joined the members of Switchfoot in lamenting our generation’s general laziness and lack of ambition. But then this week I found myself in this very situation.

In 2003, Donald Miller’s memoir Blue Like Jazz came out and seemed to almost singlehandedly resurrect the memoir genre for the Christian subculture. Devotees sprang up everywhere I looked, so I figured I ought to read it for myself. However, despite enjoying memoir (I’ve read several over the past few years that contained some of the most lovely writing and emotion I’ve ever encountered in written form) I just couldn’t get into it. It seemed…I dunno…just a bit too whiny.

Whatever it was, I couldn’t relate, and so I couldn’t get past the first chapter. I’ve read nice quotes pulled out of that book and I’m sure Donald Miller is a great writer, but his story of growing up without a father, questioning God’s existence and God’s love, hiding his faith from others during college–it just didn’t resonate because my life experience has been different. 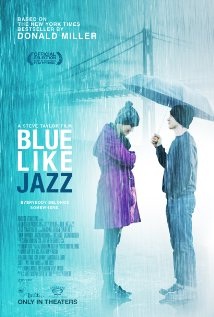 Somewhere along the way, Blue Like Jazz became a movie. A movie I had no interest in seeing, but that my husband, a compulsive consumer of Christian movies (both sincerely and ironically), kept badgering me about. Okay, badgering is too strong a word, but it kept coming up. And on an evening when there was nothing either of us wanted more than to finally sit down and vegetate, I said I’d watch it.

Blue Like Jazz the movie was pretty good. The acting was beyond the moon when it comes to Christian films. The book had been plucked for the most compelling storytelling bits. And it was made by the incomparable songwriter-turned-director Steve Taylor who wrote, among other things, most of the Newsboys songs I love.

The reason I bring this up is not to critique the book or the movie, but to talk about narrative. Narrative in a memoir and narrative in a movie are different. Unless we’re talking about some art house film at Cannes, movies generally have a stronger narrative and more forward motion than a memoir. A memoir feels recollected (because it is) while a movie, even if it begins with a voiceover from the narrator, and even if we then hear that voice now and then later on in the film, is experienced as though it is just now happening because we viewers get to see the action as it happens on the screen.

The medium isn’t necessarily the message, but it sends a message. It creates expectations in people that, when left unmet or when trampled upon, create dissatisfaction.

Is the form in which you are writing truly the best form for what you want to get across? Are you writing a novel because that somehow feels more legitimate than a short story? Are you trying to stretch a theme out to be a book when it would actually have more impact as a series of blog posts? What expectations do readers have of your chosen genre? Are you meeting and exceeding those expectations?