On Saturday, my sister and I packed up and made the three-ish mile hike to our next campsite, Au Sable Point East. I say three-ish because it really seems to me that some desk jockey at the National Parks Service (NPS) looked at a map of Pictured Rocks, estimated that the width of his thumb was, “Eh, more or less about a mile,” and then did that tongue-out, one-eye-closed sort of “guesstimating” you do when you just want to get something checked off your to-do list. Next time we are there, Alison and I plan to bring one of those fancy runner’s watches that records everything you do and actually measure the real distance. 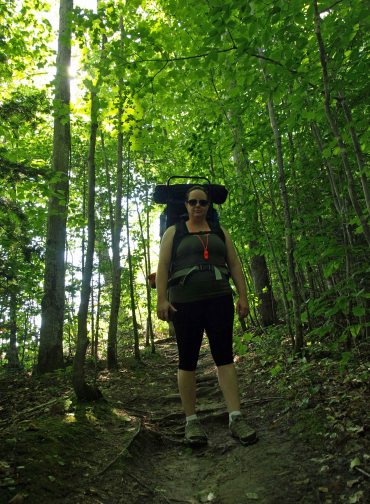 After lurching down an endless hill (“Ah, now this feels more like Pictured Rocks!”) we found the campsite and were quite happy that it was a.) very close to Lake Superior for water and scenery needs; b.) situated in an idyllic looking little area populated by pines and the cutest little baby fir trees you’ve ever seen; and c.) not far from both the lighthouse and the mouth of the Hurricane River (as we were both marvelously fond of the Mosquito River on our last trip and were looking forward to hearing and seeing another river).

We had neighbors at this site, but everyone was pleasantly quiet and industrious and no one seemed to be there to make new friends. (Alison and I come from some painfully solitary German stock on our father’s side and are never really looking to meet anyone. Ever.)

We happily strolled along the beach and examined rocks until we were chased away by biting black flies (“Ah, now this feels more like the U.P.!”) and then thought we’d check out the lighthouse.

I have a friend who “collects” lighthouses, but to me they are just one of those things you look at and go, “Hm, that’s cool,” and then move on to more important things, like marking how prevalent wild blueberries are in these parts or how fascinating that rock is over there. (Aside: Did you know that Michigan has at least 116 functional lighthouses–plus more that are no longer in service–more than any other state in the nation?) 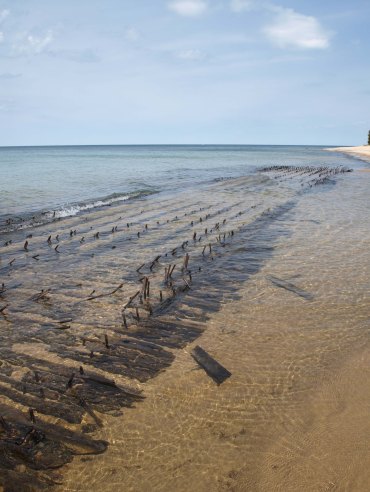 Alison and I took the “steps” down to the beach to search out the remains of shipwrecks that are visible between the Hurricane River and the lighthouse, part of the Graveyard Coast, a very shallow area of the lake that has claimed several vessels over the years and prompted the building of the lighthouse in the first place. Despite the flies and the heat and my growing blisters, it was a beautiful walk and it struck me once again how many hundreds of miles of gorgeous beach there are on Lake Superior and how little it is really used for recreation. I think that’s a good thing, don’t get me wrong. But when you think of crowded beaches downstate, it’s really quite incredible. 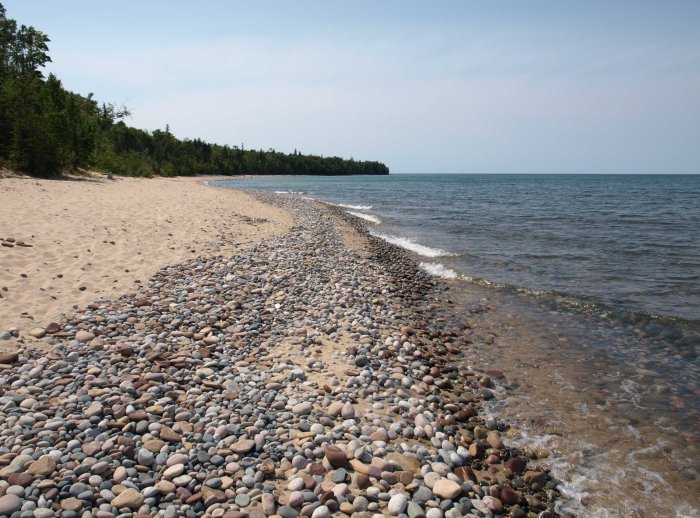 Now, above the beach and in the woods a little bit, between the lighthouse and Hurricane River, there is a bizarrely wide footpath (wide enough for a truck, and there were tire tracks on it). I can only assume that the lighthouse staff uses that path as a road to reach the light station. It also happens to be more welcoming for the people who might use the drive-in campground at Hurricane River rather than the backcountry sites that pepper the North Country Trail that runs through the park. You know, larger families with small children, the elderly, and the less-in-shape-than-even-me. In fact we met a large older gentleman with a cane and his wife coming down a real set of stairs (rather than just posts strung together with cables and flung down a sandy hill) to go see the shipwrecks and I thought to myself how odd it was to see someone like that hiking. Then we came to Hurricane River and it all made sense. 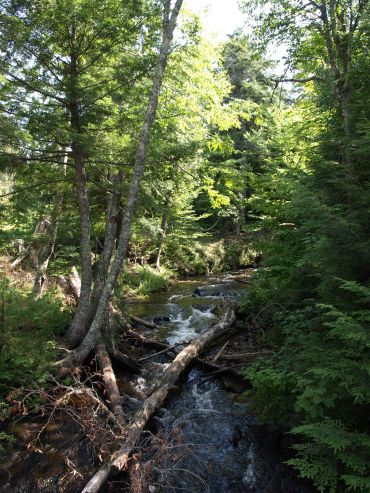 We first knew something strange was going on when we saw an RV. Just the night before I felt like I was the only person in the park, so devoid of human activity were the tops of the dunes. Then we saw another RV. And another. And coolers. And bottles of ketchup and mustard. Then we smelled meat grilling. I finally looked at the map and saw that this was one of two drive-in campgrounds in Pictured Rocks National Lakeshore. A small part of me, for a very, very short moment, was incensed. But then I started thinking about bringing my son up here sometime before he’s big enough to hike with a pack on his back. And I understood completely. This would be the way to experience a piece of this place if you could not (or were not inclined to) carry your house and food on your back to and fro. 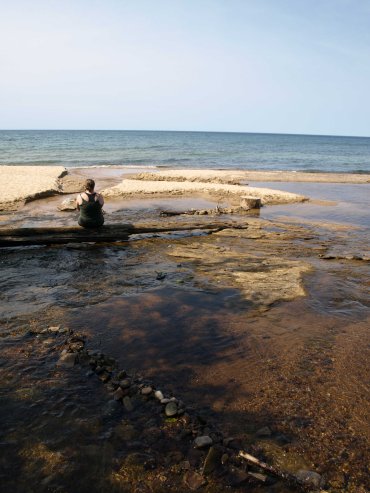 Except for the RVs and the grills and the coolers, Hurricane River reminded us a bit of the Mosquito River in that it was refreshingly frigid and the water ran over shelves of sandstone that you could walk across (carefully). We took a seat on a log in the river, cooled our achy feet, and had a snack. Then, being the curmudgeon I am, I started removing evidence of human activity from the river (in the form of little dams of rocks that a sweet little child no doubt made but which I, ardent naturalist and generally ornery person, didn’t think should be there altering the course of the water and messing up my photos).

I know. I’m a rotten killjoy. I also systematically destroy those “cairns” everyone seems to be so fond of making on Michigan’s shorelines. I don’t understand why people simply must leave their mark on the natural world and I resent them ruining my landscape photographs. There. I said it.

This is a very nice area to visit. If you are doing a U.P. trip by car and want to get a taste of Lake Superior and Pictured Rocks without a ton of footwork, I recommend parking at various parking lots along the park and taking the short hikes to places like Log Slide, Au Sable Point Light Station, the Graveyard Coast, Miner’s Castle, Miner’s Beach, Miner’s Falls, Sable Falls, and anywhere else you can see (especially the Pictured Rocks boat tours). Combine that with stops at Tahquamenon Falls, Point Iroquois, the Shipwreck Museum at Whitefish Point, the Soo Locks, and Wildwood Pasties, and you’ve got yourself a lovely trip. I recommend the first or second week of October if you also want to take a fall color tour to boot.

We eventually headed back to camp, ate dinner, then hid from the bugs in our tent. I think we were both asleep before sunset that night (36 hours with no caffeine and a lot of walking in direct sunlight kind of saps one’s energy). I was looking forward to a fairly early start the next morning as I anticipated going home to my boys and a nice soapy shower. Little did I know there would be another good reason to get moving quickly on Sunday…

Log Slide is a destination spot on the east end of Pictured Rocks National Lakeshore with quick and easy access from a parking lot. In a previous era it was used for (you guessed it) sliding logs that were cut from the forests above into Lake Superior below so they could begin their watery journey to sawmills in parts south. Nowadays, the only thing sliding down this patch of sand is tourists (some unwillingly, I imagine).

There are a couple signs warning that though it can take less than a minute to reach the bottom 500 feet (300 vertical) below, it can take more than an hour to climb back up.

The day we spent time at Log Slide I wasn’t feeling particularly energetic as we had just traversed a LOT of sand on top of the dunes and the balls of my feet were developing blisters. So instead of making the descent, Alison and I crept around on a few more-or-less-sorta stable areas just to the west of the actual slide.

You can get a great view of the five miles of sand that make up Grand Sable Dunes from this vantage point.

And you can see Au Sable Point Light Station from there as well, which is where we were headed the next day.

But before we get to the lighthouse, there is the little matter of sunset on the dunes and waiting for the Northern Lights. Stay tuned…