Well, I ended 2014 with what I’m assuming was a mild case of the flu and the news that our church had been broken into. I began 2015 with four stitches after a blunder with an extremely sharp knife that seemed to want to separate my right thumb from the rest of my hand. I also turned 35 on Friday. So there’s that.

Today was better, though. I’m healthy, my hand is healing, and I’m hoping to finish up the draft of my work in progress, a novel I’m currently calling I Hold the Wind, in the next couple weeks. I am also making preparations for what will probably be a full year researching for my next book, a historical novel set in various locales in France, Austria, and Germany during World War I and the years preceding it. I’m calling that one Enough of Peace at the moment. Here’s what I’ll be reading in 2015… 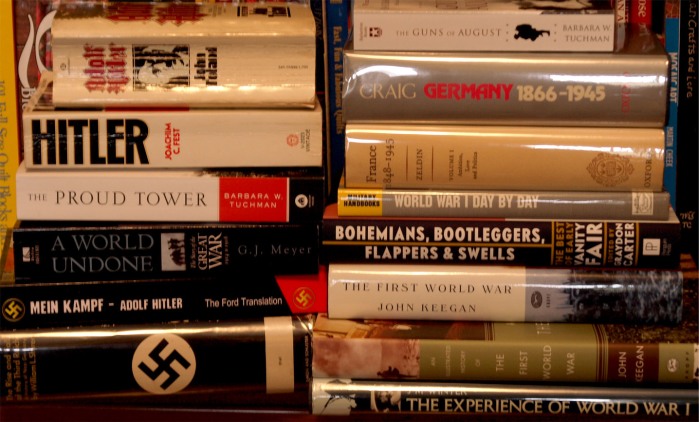 Since Christmas I’ve been hip-deep in failing aristocracies, rising anarchy, the Dreyfus Affair, and various other social and political upheavals as I read about the decades that led up to the start of WWI in Barbara Tuchman’s The Proud Tower. I’ve also been reading Mein Kampf, which has been alternately fascinating and horrifying.

Europe in the late 19th and early 20th century was glossed over a bit in my history classes. Except for the requisite pat on the back for ending the war, the First World War was not a subject upon which we lingered. Generally, we stuck to American issues: Reparations after the Civil War, the Industrial Revolution, the Roaring Twenties, and the Depression, only concerning ourselves with Europe again when we were sucked into the Second World War. For that reason, I’ve never truly understood the causes of WWI. All I remember learning about it was that it was the first truly mechanized war, it was the first war to be fought partially in the air, there were lots of trenches, and the colossal loss of life was all in vain. So I’ve got a lot of catching up to do.

Also on the immediate horizon is the Write on the Red Cedar writing conference that my writing group, the Capital City Writers Association, is putting on. We’re officially sold out (!) and taking care of all the last-minute logistics. I’ll be sure to share pictures from and thoughts on the conference in late January.

Oh, and in the past couple days, it has finally snowed. 🙂