In my ongoing quest to maximize storage as we remain in our house, I suggested to my husband that we should clean out the space under the basement stairs, build a custom shelving unit under there, and store hiking gear and luggage in a more efficient way. He was game and began the project a week or so ago, sawing and pounding and generally making it sound like he was removing the very foundation of the house. There were some things under there we expected to find — leftover paint, old area rugs that for some strange reason we had decided to keep even though we replaced them with other rugs we liked more, some things we used to have on the walls of our old apartment and I guess weren’t ready to get rid of, even though there was nowhere for them in this house, etc.

But there was one thing that surprised us — because we weren’t the ones who put it there and because the closed off closet under the stairs was so dark we never even noticed it.

When we first moved into the house at the end of 2005, there was a little shelf in the basement with the exact same design on it. We gave it to my in-laws because it didn’t quite fit our style. We knew it was either Eastlake or a later Eastlake-inspired piece. It would stand to reason, then, that this bundle of wood was a related piece. But just what was it, we wondered?

We brought it upstairs and started to unwrap it. It was partially packed with a September 1941 issue of The Detroit News (which I’ll show you all in a separate post because there was some great stuff in there). We laid out the pieces and started to ponder.

Some of our early theories were a mantle piece, a huge frame for a long lost mirror, or a headboard. A bit of putting the puzzle pieces together and searching for photos of Eastlake furniture online, this is what we came up with. 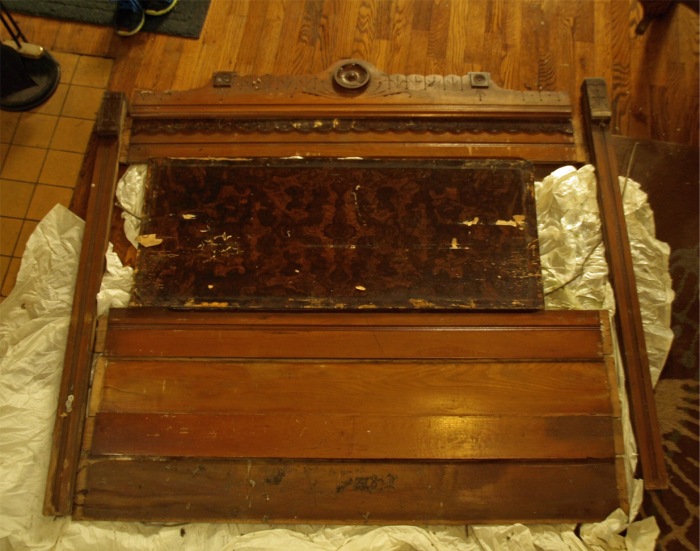 It’s a twin-sized headboard. It is missing at least two short pieces that would go vertically on either side of the darker piece of veneered wood in the middle. Whatever happened to those (and why the rest was saved even though it could not really be used again unless those pieces were present) will never be known.

What is quite interesting to me, knowing the history of our house, which was built in 1939, is that it is unlikely this 1880s headboard was ever used, or if is was, it wasn’t used long. The first resident of our house was a single female pediatrician named Frances Kenyon. If she moved in in 1939 or 1940, she would have used the headboard less than two years before packing it away with a 1941 newspaper (unless the paper had been around for a while before the bed was packed away).

I can envision her moving in with some hand-me-down furniture that she replaced with something more modern (perhaps something advertised in the very newspaper that was used to pack this old-fashioned piece away) when she had the means. And why did she keep the headboard she was no longer using? First of all, I know from a very knowledgeable friend of mine who is a historic preservationist that some bedsteads in past times were the finest and most expensive furniture you might own and they were passed down within families. But I’m not sure this was the case here.

More likely, I think, is that she kept it in case she might need it in the future — perhaps for a child? Frances Kenyon never married and she handed her house (my house) down to her niece, Sarah, who lived here until the early 2000s, when a young family bought it. That young family was transferred to another city, and that is how we came to own it. But maybe she wasn’t single by choice all her life. Maybe she had hoped to start a family and kept that twin headboard for a child who was never born.

And now we are left to decide what to do with it. It’s definitely been damaged while sitting on a basement floor for perhaps 75 years. It would need specially made replacement parts to again function as a headboard. And it’s just not our style. So we’re sending it to live with the shelf we already gave away. My clever in-laws will be thinking of a way to repurpose it in their home.

For me, the best part about my husband’s discovery of this artifact beneath the stairs was the pre-Pearl Harbor newspaper packed with it. I can’t wait to share it with you in a later post…