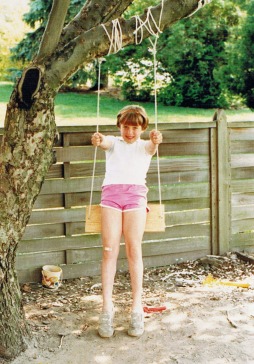 I vividly remember the first time I felt self-conscious. I blame the administrators at Bush Elementary School in Essexville, Michigan, as it was their tennis-shoes-only policy that created the problem. You see, as a small girl I refused to wear pants. I wanted to wear only dresses. And when I started kindergarten, I had starry little-kid plans to continue to wear only dresses.

When we kindergartners came in from the playground in the morning, the first thing we were required to do after hanging up our little coats and backpacks was to change out of our “street shoes” and don our tennis shoes. (I guess much of the country calls them sneakers, so if you’re lost, that’s what we’re talking about here.)

At five years old, I knew instinctively that wearing tennis shoes with a dress looked DUMB. And I felt DUMB wearing them. I felt like a DUMB idiot. And I felt that every one of my fellow students must be snickering behind my back about how DUMB I looked.

As an adult, I can now accept that absolutely no one else even noticed what I had on my feet. My embarrassment was imaginary. Call it practice embarrassment for all the years of real embarrassment that were to follow.

Still, that’s when I stopped wearing dresses. It would be years before I wore them again. Now I am often one of only a few women in my church and at my place of work who wears dresses or skirts almost exclusively. (Of course, I certainly don’t wear them with tennis shoes.)

Why do I even bring this up? Because this past week we discovered that our little five-year-old boy has a plantar’s wart (we assume from the mats at karate). We’re treating it and it is slowly disappearing, but this weekend he had two friends at our house for a sleepover. Before the guys all left Friday evening for their fun night out at karate buddy week and a sub-literate kids’ movie, I handed my husband the tube of wart remover just in case they should need to reapply. One of my son’s friends saw it.

“What’s that?” the friend said.

“That’s none of your business,” my husband replied in an effort to protect his son’s dignity. My boy’s warts are his private concern. I would have replied the same way.

But not our little kindergartner. “That’s for the wart on my foot.”

No shame. No embarrassment. No self-consciousness. Take him or leave him, warts and all.

It is not the first time I have noted with a bittersweet pang the complete lack of self-consciousness my son possesses. Bittersweet because I know that one day it will come to an inevitable end, and on that day my poor little boy will feel profoundly embarrassed. We all have to do our time.

I hope after that, though, he’ll reach a point, perhaps in early high school as I did, where he realizes that he truly doesn’t give a crap what other people think of him. I hope he can see that every person he had thought was analyzing and judging him actually had no time to do so because they were all so busy having their own near-constant paranoid, insecure self-image crises. Because you know what? It matters very little what the world out there thinks of you.

Live honestly, serve God, love people, and stop worrying about what’s on your feet. Nobody cares. Every time you find yourself obsessing over what someone is thinking of you, go give that person a compliment. Because you can rest assured they’re worried about looking DUMB too.