Last night I reworked an older painting of mine using new skills developed over the past year.

Here’s what has been over my fireplace mantel for about a year or perhaps a bit longer: 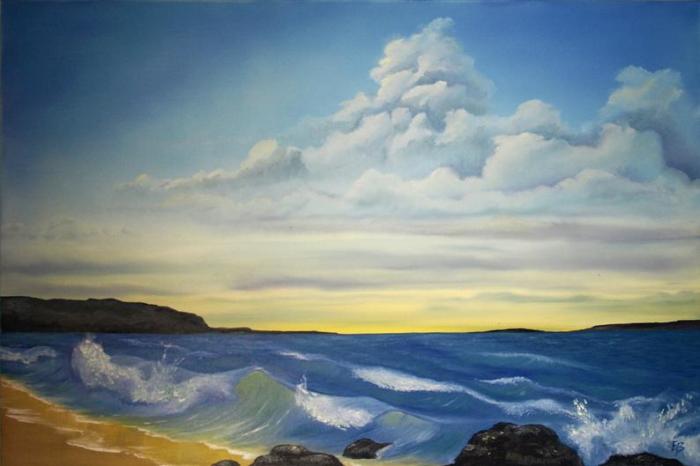 I’ve always been unhappy with the water and felt the sand and sky were too yellow, though I liked the clouds. Then I got better at water through practice. And the lovely thing about oil paints is that you can paint over what you already have to fix it, unlike watercolor. Here’s the new and improved painting:

I didn’t paint over the whole sky, just near the horizon. The truer color is in the second photo.

What I was really lacking in the water in the first iteration was light, shadow, and definition. Everything was basically one color. Actual water registers as many colors, which change depending on the light, reflections, water clarity, and what’s at the bottom of it.

This painting still isn’t perfect. I have to get better about light sources. But it’s probably as good as I’m going to make it.

For a while now I have had an Etsy store called Erin’s Artful Life, but it’s been quiet of late. I don’t have much extra time to update it. So I am going to be moving my artwork over to my website. Soon you’ll see a new page (creatively named Artwork) where I’ll put pictures of my paintings and whatever else I may decide to create in the future. Some of it will be available for purchase. Some of it won’t.

Hopefully I will get to that in the early part of 2020. All part of simplifying my online presence so it feels less overwhelming. As this year closes out, that’s what’s on my mind.

What do you think? Cancel reply

This site uses Akismet to reduce spam. Learn how your comment data is processed.