As far as Halloween costumes go, we seem to now be past the point of animals, firemen, and superheroes. We have entered the realm of clever cultural references half of the people won’t get. Which, to me, is a lot more fun than the stuff at the Halloween store. 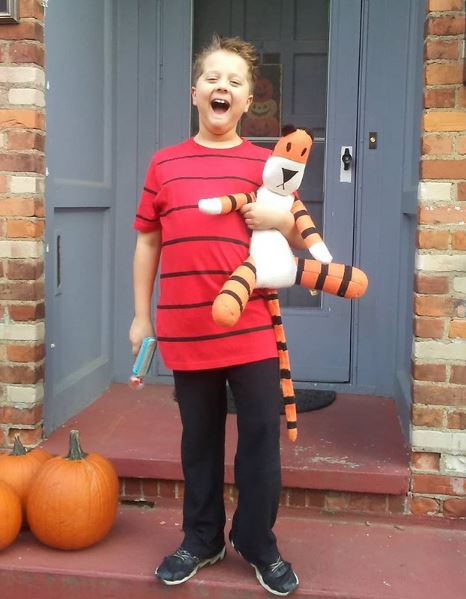 I made that Hobbes toy for Calvin when he was just a little guy. I striped the shirt with fabric paint last week. The gun is the portable transmogrifier that turns Calvin and Hobbes into various things…

Zach and I both read Calvin and Hobbes rather obsessively as kids, as did a lot of people in our generation, and it’s been really satisfying to find that they resonate with our Calvin as well.

This was such a simple (and cheap) costume because he already had everything but the shirt (which I found on clearance for less than $3 at Target) and the gel to spike his hair (which we got 30% off at Borics). And when it comes to something you will wear only once or twice (Halloween parties and trick-or-treating) I’m all about simple and cheap.