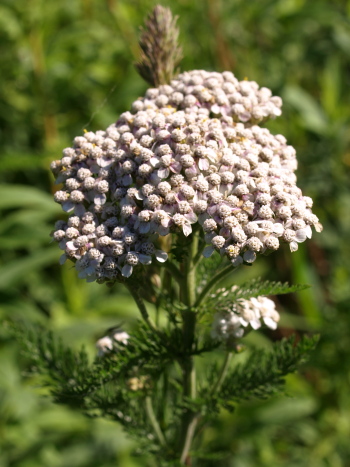 About: Another white, flat-topped flower (which is far less insidious and far more useful than Water Hemlock) you will find blooming this time of year is Common Yarrow. If you garden with perennials, you probably know there are many lovely cultivars of Yarrow to be found at your local nursery. Common Yarrow is a bit less showy, but a very useful plant that has been used medicinally for perhaps millenia to slow or stop the flow of blood from wounds (including by the legendary Achilles during the Trojan wars–hence the first part of its scientific name). It is a good companion plant in your garden because it attracts beneficial insects such as ladybugs and predatory wasps. Young leaves can be dried and used as an herb or cooked and eaten as a green. You can find many more uses and recipes in herbals.

Here it is growing alongside lookalike Queen Anne’s Lace: